So, let us observe this gentlemen here.

At first glance, we see he is playing an accordion on a bridge. – This photo was taken May 29, 2013 in Paris, Somewhere near Notre Dame. So it is a very well tourist populated area, loaded with street performers and beggars.

Now that we have our pre-stereotype-label-homeless-poor-old-guy image in our head we will take a look a little deeper at this photo.

While walking to find a coffee shop that would give us a free glass of water (impossible to find in Paris) we crossed this bridge. – If you have been reading my other posts or following this blog you will, again, know I was trying to push myself out of my photography comfort zone and point the lens at people on the street. –

I spotted this man from a distance and started to brainstorm how I was going to capture the essence of him without being to obvious. The reason I try to be discreet is because I don’t want people to strike a pose. Example whenever I would shoot my friend Graham he would pose. – When people see a camera they instantly feel they need to change who they are in that moment to become a more photo-better-them…. –

I snapped a few shots from an angle, but knew that wasn’t the shot I wanted. – I was imagining the straight on black and white cliche shot of a person on the street. – Well the above picture is my attempt at that.

In order to get the shot, I walked directly in front of the guy cranked my lens to 50mm, half pressed to shutter button to focus the lens, and took the picture. – Buy the time all of this happened, my friend here… smiled. – He spotted the camera and boom became someone else. – – A side note, in France, smiling in a photo is known as a very American thing to do. The french think you look like a joke or a Jim Carey goof when we crank out a big smile in a photo. – So, upon review of this photo I was taken back by the fact that he smiled a little bit.

I took a few more shots of this guy and threw a euro into his coin box. – I gave the guy money for two reasons. 1. He was playing music on the street. 2. When I take a picture of someone I feel like I am in a sense stealing or raping that person of who they are and all their private being of what they are doing. It’s hard to explain, but a picture can label a person as so many things that they are not. So after making him subject to a on the spot photo shoot, I gave him a few euro’s of compensation. Just so I felt better about myself, even though I did not nearly give enough money in comparison to what “he” is worth,

OK, continuing the theme of picture labeling people. You may look at the above photo and see what you would say is a lower class man without a job trying to make enough money to live. You may even be hesitant to give money to this man because you worry he may spend the money on alcohol, cigarettes or even worse, in your precious opinion, drugs. – well, let me explain, just by looking at the photo, why that would be a wrong impression.

Side note, I could be wrong, I do not know this man and I also had thoughts of the above sentences.

First notice the instrument. A world renowned Honner. That, is not a cheap instrument. Observe its condition. Second, his hat, Mint. Third, his playing posture, says to me he has had formal training in the instrument, probably at a young age. Fourth, His pants are wrinkle free with s sign of a seem on the left leg, tells me they were ironed recently. Also, they are rolled up above the shoe, showing proper outdoor etiquette. Fifth, shoes are shined. Sixth, his over all attire was perfectly planned for the weather of that particulate day in Paris. To me that says he probably checked the weather before leaving the house this morning.

I would say, This man is just bored and loves to play his accordion for people as a hobby on the street of Paris.

It’s funny, because I’m using stereotypes to explain why this guy is not a stereotype. 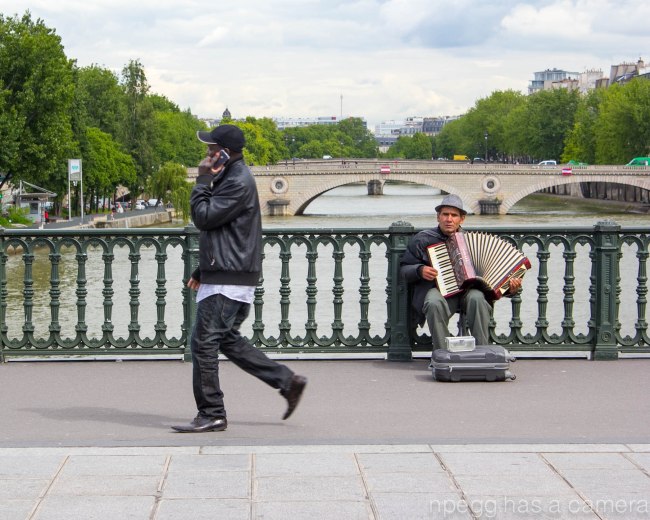 We carried on our way to a coffee shop for a hour or so, then realized we need to go back to Notre Dame to meet up with some friends. – We crossed the bridge again, this time on the other side of the street. I was able to grab some more shots of this guy on the way back, this time hoping he wouldn’t spot me and smile. – He did notice me, but didn’t pose. –

I really like this picture because the blur in the feet of the man on the cell phone. This is fairly accurate of culture now a days. Showing how wrapped up we are in our lives and failing to see the beauty of the music being played by the accordion player right next to us.

I messed the focus up on this shot though. Its a real crisp shot of the railing of the bridge.

This is the shot I imagined when I spotted the man playing. – I love this photo and am proud to post it. – For many reasons.

I think I like it so much because the shot actually bugs me now after editing it. – I look at it and kick myself for not walking a few meters to the right and take the picture square on parallel with the railing. – You can tell I’m standing on an angel because of the sidewalk on the lower third of the photo. As well, the slant of the railing. I could fix these things, but that would be like showing something that I am not. It would become a fake picture.

I should have taken the extra time to properly set the shot up, but in my defense the rest of my group was already across the busy intersection to my right and I was waiting to attempt to get a shot of the man without any pedestrians walking by and that took some time and fear of loosing the group I was with.