I recently looked out my window and realized it was night. An urge to go play with camera settings out in the darkness came over me. Here are a few shots from that endeavor.

Everyone’s first instincts are to point there camera’s at the moon and hope for the best. Well that’s exactly what I did. This is my attempt at a clear moon shot. – This was at an 8 second shutter time. – The first thing you notice is the Clouds, they do look cool but when trying to take a shot of the moon they seem to get in the way. Along with the light pollution coming from the city I live in reflecting off the clouds and back into the sensor on the camera. It still looks cool in a sense. 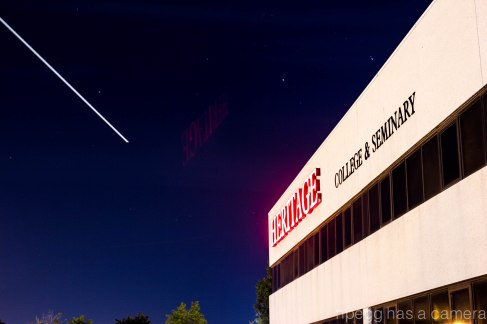 Here is a cool shot of the school that I go to. –

Everything about this photo is wrong. Angles, placement, thirds blah blah. The story is that i was taking a 20 second shot of the opposite direction which did not turn out as planned, but while waiting the 20 seconds to pass by in hopes of a great shot, I looked behind me to see what I thought was a really bright star. Instead I realized it was a plane in the distances. quickly that distance was getting closer….. So I said to my self that the moment the shutter releases on the previous picture I’m going to spin the camera, place the “Heritage” Sign on the right and the dot of light in the center and open the shutter. –

This in the final product.

“We sure don’t like darkness” Was my thought over this photo.

An excess of light.