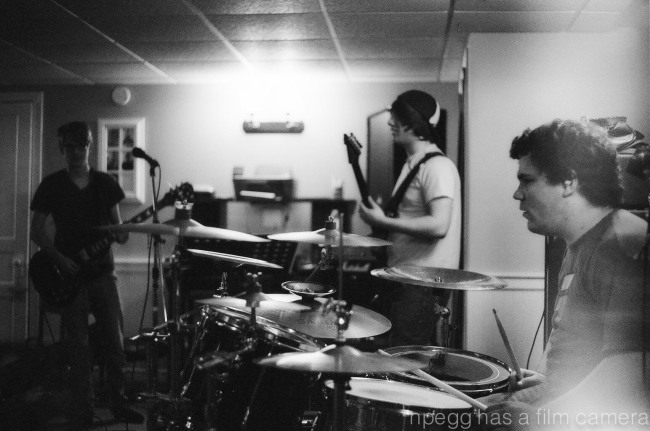 I live in a really cool house with a full Jam space in the basement. One of the guys i live with has a band and they were practicing one night. Having fallen in love with the idea of using film to take photo’s I thought about what kind of shots I could get on the 2.0 50mm. I imagined some really contrasty shadowed focused black and white shots. Some, action shots and un-staged photo’s. – I also thought about the excitement that comes with shooting film. How you only get the one shot. You can’t take the 500 shots and hope to get the right one by chance. you have to know your setting, follow your light metering, get your focus manually, and every time you release the shutter, it cost about a dollar to later on see that photo.- This sounds like fun to me.

So, I started walking around while the band was jamming a song that they knew really well. I noticed their faces, they body language. They were very relaxed. – I didn’t really start to see anything I thought was worth the moment on film. So I didn’t click the shutter button, even though I was setting up to.

I think there is great beauty in not taking a photo and just leaving a moment to never exist again.

It wasn’t until they started playing a new song that not all of them knew that I started to see the shots that I thought would be cool. – I noticed each of them paying very close attention to each other. Waiting for cues, and listening to the other instrument parts as if for the first time. I saw a sense of being lost come across many of their faces, a sense of wonder. – I also noticed great joy through all of this, a sense of freedom in creation of music for the first time.

I plan on printing this photo and putting it on my wall. – Not really sure why. Maybe it’s because I took the photo and am proud of it because its on film, and in black and white. – Or maybe it’s because I know each of the guys in the photo quite well. I’ve seen them grow as musicians and as humans. They are at an amazing moment and stage in their lives right now and later we will look back on this photo and remember who we used to be. – Not for the music (well maybe) but for who they are as humans.